The energy sector in Croatia

Croatia has around 4.28 million inhabitants and rich potential for renewable energy and energy efficiency. In 2016 the country produced 57.3 percent of its total primary energy supply, including around 20 percent of the oil it consumes, and around two thirds of natural gas. Unlike most of its Western Balkan neighbours it no longer has its own coal reserves.
Croatia produces only about half of its own electricity, depending on hydrological conditions. Most of the electricity generation capacity is owned by Hrvatska Elektroprivreda, the state-owned electricity group. In 2015, 57% of domestically generated electricity came from hydropower, 20% from coal, 12.4% from oil/gas, 7% from wind, 2.3% from biomass and 0.5% from solar. In other words, non-hydropower renewables accounted for just under 10% of generation. Krsko nuclear power plant in Slovenia, of which HEP owns 50 percent, also contributes to Croatia’s electricity supply but is counted under imports in the statistics.
Electricity generation in Croatia, 2015, GWh 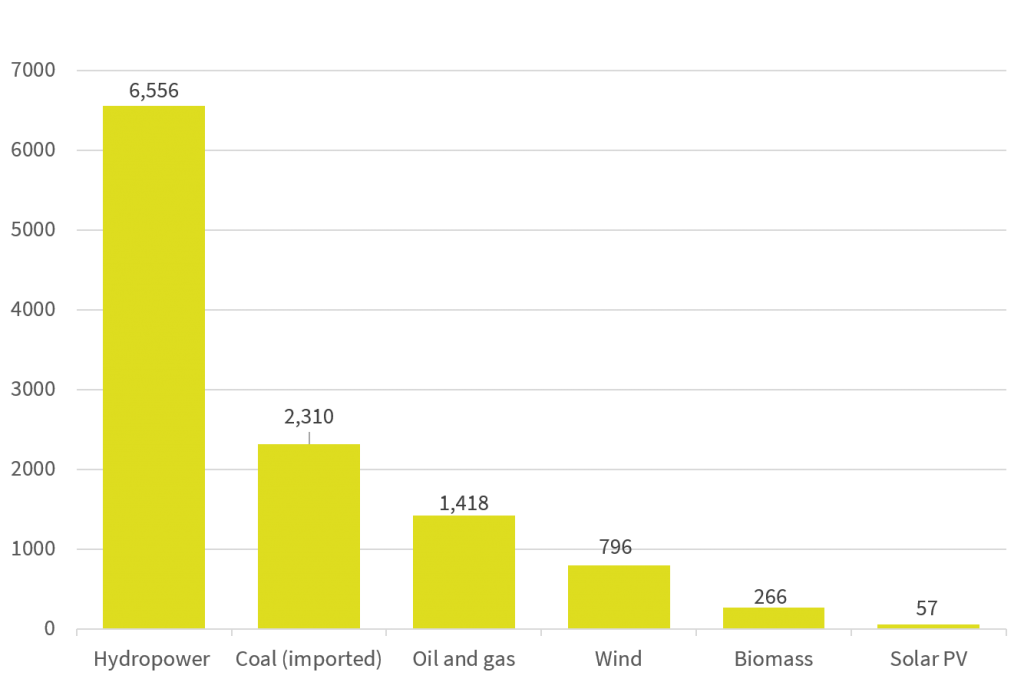 Although Croatia has made some progress in using its wind and solar PV potential in recent years, this there is still much more potential that has not been exploited. Solar thermal is also underused compared to the obvious potential in this very sunny country.
Renewables and energy efficiency development has been held back by a lack of political will resulting in small quotas for support for wind and especially solar. Croatia has not developed a new energy strategy since the over-ambitious and outdated 2009 one, so there has been no systematic debate about the country’s energy direction in recent years. In line with EU state aid rules, Croatia has now switched to auctioning and feed-in premiums rather than feed-in tariffs, but as of May 2018 had not approved the supporting legislation that would enable the system to function, this braking further development until this is resolved.
Much time and resources have also been lost on pushing outdated projects such as the 500 MW Plomin C coal power plant, to be run on imported coal, the 450 MW Peruća gas power plant, and large-scale hydropower projects in sensitive locations such as Ombla and Kosinj. The first three of these projects have now been cancelled after civil society campaigns highlighted their weaknesses. However a floating LNG terminal on the island of Krk is still planned, with support from the EU.
Croatia still has plenty of potential for energy efficiency improvements. Its energy intensity of total primary energy supply was 21.9 percent above the EU average in 2016. There is still plenty of work to be done to improve efficiency in the residential sector.
Sources:
BONUS

THE WINNERS OF THE EU SUSTAINABLE ENERGY AWARDS 2018 WERE ANNOUNCED AT AN AWARDS CEREMONY WITH THE EUROPEAN COMMISSIONER FOR CLIMATE ACTION AND ENERGY, MIGUEL ARIAS CAÑETE, IN BRUSSELS.

12 projects across 4 categories made it onto the Awards shortlist this year.

In 2008, the 7,200 inhabitants of Saerbeck decided to become self-sufficient in renewable energy by 2030 implementing over 150 actions based on an approach to link people and profits and transforming an old army munitions site into a sustainable energy park.
“We are proud to have received this award. It’s a big ‘yes’ to continue our way. We have been working on this project for the past 10 years and we are not at the end yet. This prize gives us the motivation to continue,” on behalf of Bio.Energy.Parc.Saerbeck Guido Wallraven said.

Project supports Alpine authorities in making the transition to a low-carbon area. Involving more than 200 municipalities across 6 countries, PEACE_Alps focuses on energy management, building renovation and public lighting. It also helps authorities overcome barriers in implementing their strategic action plans.
“Have a good project that is a good idea, with a good team behind it. We have been lucky at PEACE_Alps with such a team. It’s about the spirit of the people and believing in the change and transition,” Silvio De Nigris accepting the award on behalf of PEACE_Alps said.

Funded by the EU’s Horizon 2020 programme, WiseGRID has developed a set of 9 solutions to improve the electricity grid and empower customers, by making the grid smarter, open and more consumer orientated.
“It’s very exciting. We are very happy about both our awards – from the jury and especially the citizens’ Award – this means that it’s not just the technology which is ready to help the energy transition but society is also willing to embrace the energy transition,” said Antonio Marques accepting the award for WiseGRID.

What began as an online hub providing information on sustainability, developed into an annual architectural competition inspiring young architects to lead the way in energy transition with their innovative, energy-saving designs.
“This award is for all the people that worked on Czech Sustainable Houses project. We started this project four years ago and we’ve created the largest student architecture competition. We also created a new system for energy management and households. We’re just a little grassroots organisation, but we’re dynamic,” explained Pavel Podruh, Czech Sustainable Houses project on hearing that his project won.
Croatian Center of Renewable Energy Sources (CCRES)

ZELJKO SERDAR Dedicated to advancing energy efficiency as a means of promoting both economic prosperity and environmental protection.Working to harvest this knowledge. The pioneering experience of corporations, governments and financiers will be captured, analyzed and made available for others to learn from. http://solarserdar.blogspot.com/