Posted on July 15, 2012 by CROATIAN CENTER of RENEWABLE ENERGY SOURCES

Algae’s potential
What makes algae a better alternative fuel feedstock than cellulosic feedstocks, such as switchgrass or miscanthus?
What transportation fuels can algae produce?
How much fuel can algae produce?
Where could this type of algae grow?
What can you do with material derived from algae production not used for fuel?

Economics
How much would a gallon of algae-based transportation fuel cost if it were available at a service station today?
What can accelerate the commercial availability of algae biofuel?

Environment
How will algae-based transportation fuels impact greenhouse gas emissions?
Is the process capable of being replicated at the local level to increase energy efficiency and promote low-energy overhead?

Security
Can algae-based fuels be used in developing countries to help them bypass fossil fuel dependence? 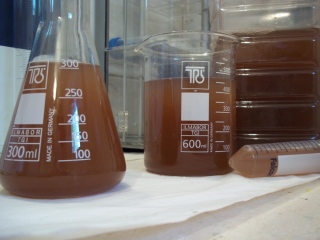 CCRES ALGAE
Q: What makes algae a better alternative fuel feedstock than cellulosic feedstocks, such as switchgrass or miscanthus?

A: Large-scale production of resource-intensive plants, like switchgrass or miscanthus, requires a substantial amount of fertile land, fresh water, and petroleum-based fertilizer to grow. The fuel derived is ethanol, a lower-energy fuel not compatible with the infrastructure now used to transport, refine, and deliver liquid fuels, like gasoline and diesel.

Conversely, algae can produce hydrocarbons capable of being converted directly into actual gasoline or diesel fuel, which can be transported and delivered to market using the existing refinery infrastructure.

Q: What transportation fuels can algae produce?
A: Algae produce a variety of fuel and fuel precursor molecules, including triglycerides and fatty acids that can be converted to biodiesel, as well as lipids and isoprenoids that can be directly converted to actual gasoline and traditional diesel fuel. Algae can also be used to produce hydrogen or biomass, which can then be digested into methane.

Q: How much fuel can algae produce?

A: The United States consumes 140 billion gallons per year of liquid fuel. Algae can produce 3,000 gallons of liquid fuel per acre in a year, so it would take 45 million acres of algae to provide 100% of our liquid fuel requirements.

Q: Where could this type of algae grow?

A: Algae perform best under consistent warm temperatures between 20 and 30 degrees. Climates with plenty of sunshine offer optimal conditions. Ideal Croatian locations include many of the southern and southwestern areas, such as Dalmatia,(including Dalmatian hinterland ).

CCRES ALGAE
Q: What can you do with material derived from algae production not used for fuel?

Q: How much would a gallon of algae-based transportation fuel cost if it were available at a service station today?

A: Today, the cost would be relatively expensive. Additional investment in research is needed to further refine and enhance the algae strains that generate such fuels. Also, more infrastructure needs to be developed to achieve the necessary economies of scale that will come with large-scale commercial production. Once overall efficiency increases, the cost of producing a gallon of gasoline from algae will dramatically reduce.

Q: What can accelerate the commercial availability of algae biofuel?

A: As viable and potentially transformational as algae-based transportation fuels have already proven, we need a much better knowledge base on algae at the microbial level. We also need to build on this platform to develop the tools and train the next generation of scientists that will help usher in the age of accessible, affordable, and sustainable fuels made from algae. That is a central component of the Croatian Center for Algae Biofuels (CCRES Algae Project). 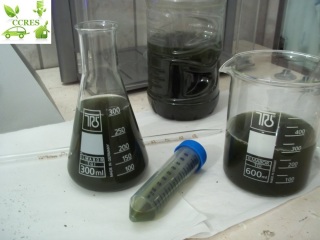 A: Production of alternative transportation fuels from algae will help reduce the amount of CO2 in the environment. Algae provide a carbon-neutral fuel because they consume more CO2 than is ultimately released into the atmosphere when algae-based fuel burns. The amount of carbon removed from the environment will depend on the number of algae farms built and the efficiency with which algae can be modified to convert CO2 to fuel products. Eventually, algae farms will likely be located adjacent to CO2 producing facilities, like power plants, resulting in potentially significant CO2 sequestration benefits.

Q: Is the process capable of being replicated at the local level to increase energy efficiency and promote low-energy overhead?

A: Absolutely. There are huge advantages to locating algae farms near urban centers. The algae consume industrial waste and contaminants, which are usually found in higher concentrations near cities. A perfect location is near a power plant, where the algae can consume flue gas and other waste, or near a wastewater treatment plant where the algae could consume significant amounts of nitrates and phosphates from the waste stream. This could result in cleaner effluent discharge, and perhaps eventually create “new” sources of non-potable water for industrial or agricultural use.

Q: Could algae-based fuels be used in developing countries to help them bypass fossil fuel dependence?

A: Algae-based fuels (and the protein byproducts derived from their production) definitely have the potential to positively impact developing countries. The requirements for farming algae are fairly straightforward and can be done almost anywhere in the world with an adequate supply of sunshine. In Africa, for example, millions of algae acres could be farmed in its less-populated regions, resulting in a reduced dependence on foreign oil and a reliable and sustainable energy supply.